L ake Ontario, smallest and most easterly of the Great Lakes of North America. It is bounded on the north by Ontario (Can.) and on the south by New York (U.S.). The lake is roughly elliptical; its major axis, 193 miles (311 km) long, lies nearly east to west, and its greatest width is 53 miles (85 km). The total area of the lake’s drainage basin is 24,720 square miles (64,025 square km), exclusive of the lake’s surface area, which is 7,340 square miles (19,011 square km). The Niagara River is the main feeder of the lake; others include the Genesee, Oswego, and Black rivers from the south and the Trent River from the north. The 30-mile-wide eastern extremity of the lake is crossed by a chain of five islands, where the lake discharges into the St. Lawrence River near Kingston, Ont. With a mean surface elevation of 243 feet (74 m) above sea level, Lake Ontario has a mean depth of 283 feet (86 m), and its deepest point is 802 feet (244 m). A general surface current (8 miles a day) flows toward the east and is strongest along the south shore. The Welland Canal (navigational) and the Niagara River (natural) serve as connections with Lake Erie to the southwest. Lake Ontario is linked with the New York State Barge Canal at Oswego, N.Y., and with Lake Huron’s Georgian Bay via the Trent Canal at Trenton, Ont. The Rideau Canal runs northeastward in Ontario from Kingston to Ottawa.

Fishing on Lake Ontario with Northeastern Sportfishing Charters
Lake Ontario is famous for it's world class fishery and it's record breaking Trout and Salmon. We are located on it's eastern end out of the Little Salmon River, which is located perfectly between the Big Salmon River (Port Ontario) which has the biggest Salmon hatchery on the lake and Oswego NY which is another major river on the Lake that is famous for it's fishing. The location allows us to be right where the fish are whether it be trophy Brown Trout in the spring and early summer staying in their preferred waters near the river, and structure in Mexico Bay, or the Massive King and Coho Salmon making their way to spawn in the late summer and fall. Being in this area allows us to target and stay on the fish and make your charter more successful!!

April/May:
In early season (April and May) we target high numbers of Brown Trout and Steelhead right off the surface using planer boards and high downriggers if you chose we can move offshore in search of Lake Trout!!

June:
In June, as the lake starts to transition, we start moving further offshore chasing trophy Brown Trout and lunker Lake Trout; all the while keeping an eye out for the schools of King Salmon and Steelhead that are soon to arrive.

July/August:
July and August are a mixed bag of everything! The King Salmon and Steelhead are sitting offshore, the Brown Trout just inside of them and the Lake Trout are everywhere inbetween!

September:
September is the month for big King Salmon as well as Coho Salmon that have come in to stage! Being in the corner of Mexico Bay allows us to follow the Salmon from offhsore all the way into the rivers at the end of the month when they head upstream to spawn!

October/November/December:
In October, November, and December, after the staging Salmon have gone up river, we switch back to our Brown and Steelhead fishery! Starting at the end of October, we fish a mixed bunch of Browns and Steelhead in the 30-100 feet of water zone. As the month progresses into mid-November and the Steelhead head to the river, we continue to chase the Brown Trout into the winter until the ice keeps us off the lake for the remainder of the season. 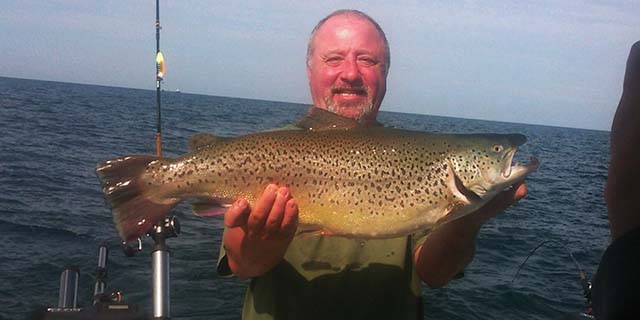 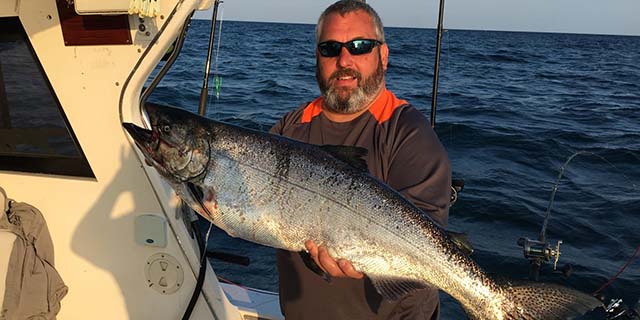 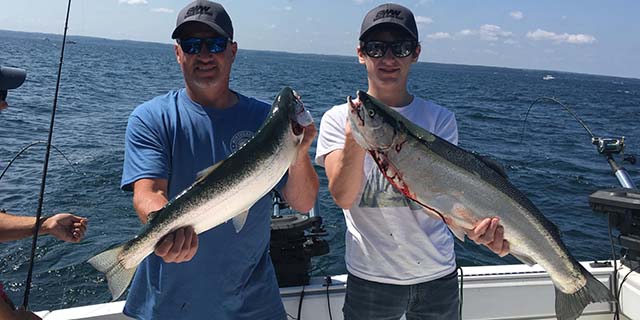 Steelhead in the spring range from 3- 12lbs and in the summer from 6-20lbs!